Return of the Mac

A report on the Fleetwood Mac gig at the NEC in November 2003 for an e-mail newsletter:

On the day that Concorde made its very final farewell flight around the Bristol area before landing at Filton, we headed north to Birmingham to see another ‘seventies icon, possibly also on a farewell tour.  Fleetwood Mac were playing the NEC arena. 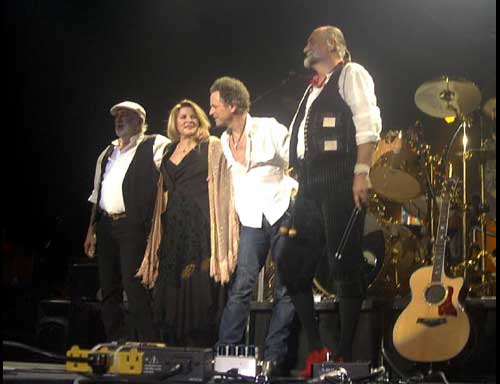 I didn’t watch Concorde’s last flight.  Somehow the retirement of an aeroplane, even one I had spent my formative years as an Author working on, didn’t do anything to move me.  I had seen it fly for the first time (now that was a buzz!) and all good things come to an end, even if sometimes prematurely.  Another point, of course, is that classic designs never age, whereas rock stars do.   I could imagine those gorgeous delta lines swooping low over Brunel’s Clifton Suspension Bridge, bringing a tear to the eye of every onlooker, the massive Olympus engines emitting the same sound they were designed to make over 35 years earlier.   But what about a rock band that started in the same era, are made of less robust material, and now with a collective age in excess of 200 years?   You can picture something, but only the reality can confirm the image.

Well first impressions were not promising.  Only four members are on the tour, Christine McVie having departed the scene many years ago promising never to return, and keeping to her word.  On the latest album, the current single ‘Peacemaker’ has an almost grating vocal quality that detracts from what is otherwise a good song, even after studio magic has been applied.  So how would the band cope live without the velvet tones of their ex-keyboard player providing those magical harmonies in counterpoint to the brashness of Lindsey Buckingham and the rasp of Stevie Nicks?   The answer was provided by a combination of two virtually anonymous girl backing singers and a complete absence of tracks like ‘You make loving fun’, Songbird’ and ‘Everywhere’? 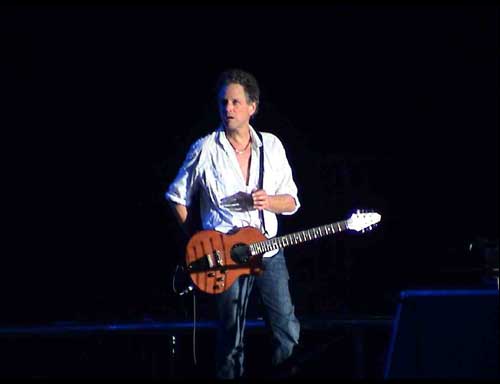 The lights go down, to mosh pit whoops and hollers as shadows move about the stage, then up go the lights and there they are.    Out front there’s a thin grey-haired character with a guitar, wearing tatty jeans and a crumpled white shirt, looking like a strange parody of Kramer (out of Seinfeld), and stumbling through the riffs on the opening track, ‘The Chain’. 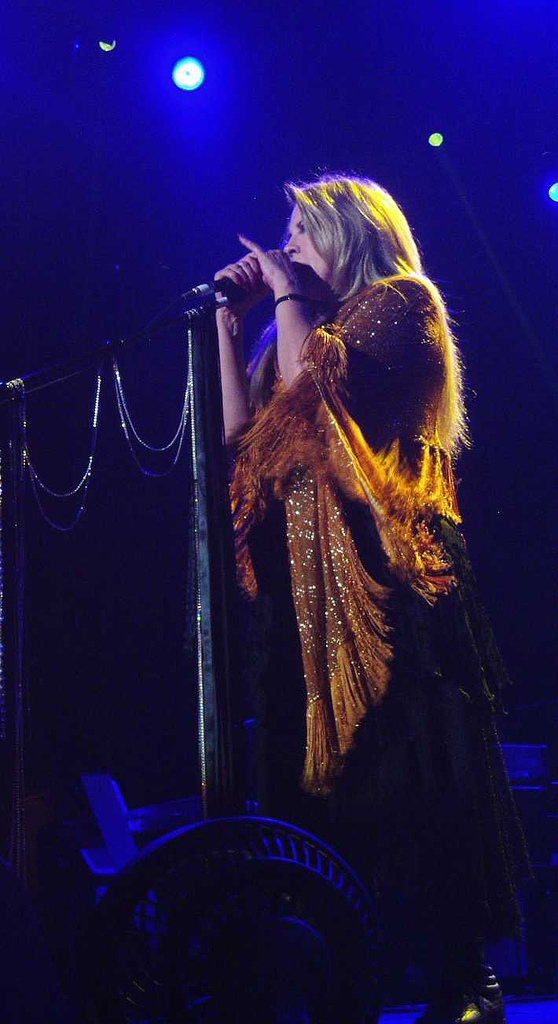 Alongside him, this dumpy little Apple-pie mom character in a lacy black dress, with straight honey-coloured hair rattling a tambourine just like she would at the Sally Army on Sunday lunchtime.  At the back, an old guy playing the bass guitar in a flat cap and waistcoat looking like he just drifted in from the allotment having fed his whippets, and in the middle a balding grandad with a grey beard, staring eyes and misfitting dentures who is just about to embarrass his grandchildren by showing them how he used to play the drums back in his heyday.

But how first impressions can be deceptive.   Kramer rings the neck out of every guitar he lays his hands on, in a way that would have heavy rockers half his age shouting their unworthiness.   Grandad never misses a beat in over two-and-a-half hours, and is still going strong at 100% time at the end, whilst whippet-man lays down complimentary bass-lines with consummate ease.   Then apple-pie begins to sing, and that voice – oh that voice! – running down your spine like sandpaper and honey all mixed together.

The set is a mixture of old, not-so-old and new, moving from out-and-out hard rockers featuring Lindsey up front, through more mellow numbers and ballads fronted by Stevie, to nice little acoustic mini-sets featuring different band members.  But it’s the absence of Christine McVie that really begins to make its mark as the evening progresses and the band gets better and better, demonstrating that without little Miss Perfect (the first record of hers I bought was ‘Tears in the Wind’ when she was Christine Perfect, the lead singer of Chicken Shack) to interrupt the momentum, this is one heck of a rock band!

Occasionally, the sound is interrupted by the odd incongruous images, like when Stevie tries to do her White Wing Dove dance, arms outstretched, back to the audience, and you realise that if this bird is ever to fly again, then there needs to be a little less corn in the dovecote.  But the sound of that voice easing-out ‘Silver Spring’ and ‘Landslide’ quickly returns the mind to what you are really there for, rock music performed by some of the best artists in the world.

Highlights were many.   Stevie singing ‘Rhiannon’ like it was still 1975 when I was riveted to the spot listening to the track for the first time on Radio One.  Not many tracks have done that in my lifetime, because not many are ever that far ahead of their time, but it ranks up there with the likes of ‘Good Vibrations’, ‘White Room’, ‘Bohemian Rhapsody’, ‘Sultans of Swing’ and ‘In the Air Tonight’.  Lindsey and his amazing acoustic version of ‘Big Love’.  Is he really only playing that guitar with just two hands??   Then the entire crowd singing happy birthday to John at the end as the fluffy penguins rained down on the stage. 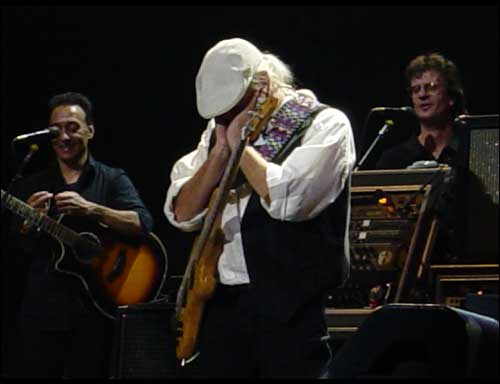 And the man himself.  He may be six foot six, and looks like he should have a bus pass, yet he has still got to be the best drummer in the world.   He has played virtually non-stop for an hour and three quarters, when they strike up ‘Tusk’ with it’s driving drumbeat.  The spotlight fixes on the drum kit and all you can see are the reflections of the white ends of the drumsticks tracing curves and figure-of-eights in a blur of movement.  For five minutes the beat never wavers, then six, seven and finally they call it a day.  The crowd roars to its feet thinking that’s the finale, but no, straight into ‘Stand Back’.

The driving rhythms still continue unabated as the drum kit pulsates under the incessant blows being inflicted on it.  After three or four minutes, Stevie leaves the foreground as the band becomes a three-piece heavy rock group, Lindsey’s guitar screaming for respite as he throttles it within inches of its life in complete contrast to John who is driving the bass-line ever onwards with the grace of a swan.  Seven, eight, ten minutes, who’s counting?  Everybody is clapping in time, the sea of hands groping ever skyward in support.   When they finally bring it to a halt, the crowd just refuse to let them go, but of course they do, the lights go down and the demands for return rise to a crescendo.

You think, if they come back, they will need ten minutes of oxygen first, but no, within a minute, up go the lights and they bound back on stage led by Mick in his infamous drum-pad waistcoat.  My God!, I think, I can give this guy probably six or seven years, but I’ve had to sit down every third song, and I’m only watching!!!   They strike-up ‘World’s Turning’, and a minute or so in, the spotlight’s on the drum kit again, and Mick’s off into a drum solo.  For two or three minutes he pounds away, then he’s into a duel with the percussionist for three or four minutes more, then up he gets, grabs a bongo and he’s leaping about the stage, still duelling with the Japanese percussionist, who is also excellent (never seen anybody before who can get a sound out of a tom-tom by running their finger round the rim as if it was a wineglass). 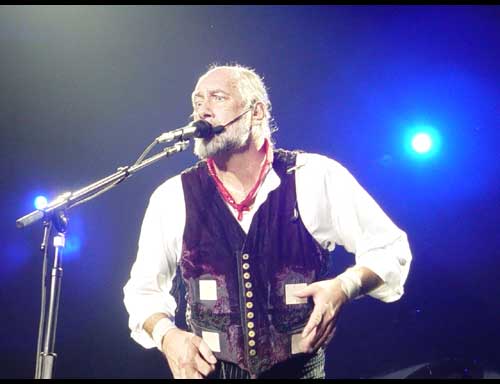 Then to the waistcoat.  If you haven’t seen the routine, it’s difficult to describe, but there are four pads built into the front, and it’s linked to a synth that he changes as he plays.  First they sound like drums, then guitars, voices and so on, all still being played in unbreaking rhythm with his fingers, no sticks, while he’s leaping up and down the stage like a huge court jester.  Probably a quarter of an hour after the rest of the band departed into the shadows, they come back to finish the track, this has got to be the end, but no – straight into ‘Don’t Stop’ and the building starts to move across its foundations.

At the end, a tumultuous reception, and it’s time to go home, right??  Do me a favour, the boys are only just getting warmed-up!!!   Two more complete encores, and the crowd still don’t want them to go, and this is a crowd with an average age that had to be over 40.  Who said wrinklies don’t know how to have fun!!!!

It was probably not the very best gig I’ve ever been to, Pink Floyd’s Pulse tour in 1994 still holds that billing, but it was right up there.   If it’s heading your way, don’t miss it.  You may never get another chance.