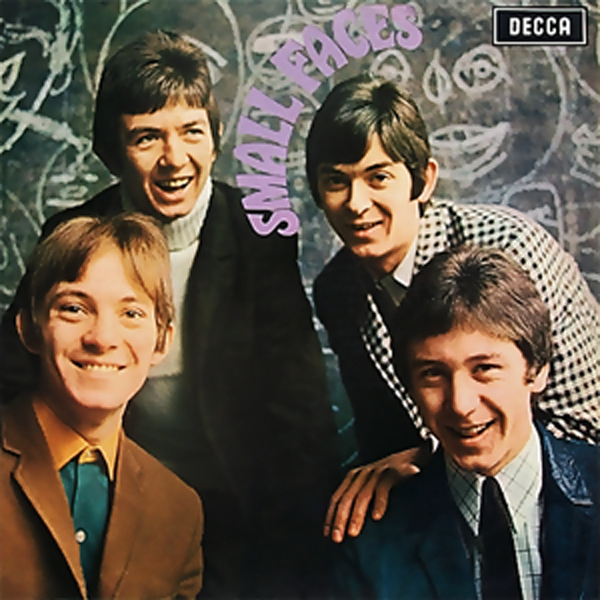 Towards the end of the summer in 1965, a new band had a minor hit in the charts and appeared on Top of the Pops and Ready Steady Go! to promote it.  It wasn’t just the amazing track that was being played everywhere (OK, everywhere that mattered when you were fifteen), but the look of the band as well.  Because here were four Mods who had formed a band – and they could play.

A couple of months later, they came to the Pavilion and it was packed to the rafters.   Of course, you could barely hear them because the PA was shit, as it was with most bands back then, and the crowd pretty much drowned out the rest.  But their little bundle of energy of a lead singer was incredible – Steve Marriott had to be seen live to believe him.   Another hit came in February 1966, this time in the top three, and the Small Faces had arrived.  Their debut eponymous album arrived in May, and was immediately added to my growing collection.

But 1966 was to turn out to be a difficult year for my music, particularly the second half.  It wasn’t just that it was O-level year, but my upcoming sixteenth birthday meant that I could have a two-wheel driving licence, and that highly-coveted scooter.  But a Lambretta, as I quickly discovered, wasn’t cheap – everybody seemed to want one and even the tatty ones needing work were being snapped-up for way over the odds.  Moreover, the continual expenditure of my part-time job money on circular pieces of vinyl wasn’t helping bridge the gap.

It was mid-June when my mother came up with an idea that, on the surface, seemed to offer some help in relieving those conflicting calls on the finances – would I like a tape recorder for my Birthday the following month?   For how that translated into the total loss of my record collection you will have to read the book, but the result was that there were no other record purchases in 1966, and what was essentially a posthumous choice of what had become, potentially, my final album of the year rested among those that had been acquired in the first half of the year and now resided elsewhere.

It wasn’t a difficult choice though, because Small Faces was head and shoulders above the others.  Side one opens with the only cover on the album – Sam Cooke’s Shake; this was also the only track that Steve Marriott didn’t sing, Ronnie Lane taking the lead on this one.   As may already have been noticed, covers were a major assistance in putting a debut album together back then, because few bands either had, or could come up with, enough original material in the short time demanded by a record label trying to cash-in on early success in the singles charts.   That the band contributed eight of the twelve tracks, having only formed a year earlier, is testament to them being at a different level to most other new bands, apart perhaps from their mod contemporaries The Who.

Track two was written by all four of the original line-up, including keyboard player Jimmy Winston who had left the band by the time this album was released.  He played on five of the tracks, including this one, being replaced by Ian McLagan on the rest to form the classic line-up.   Come on Children makes the instant statement that this is not a pop group, but a rock band with blues and soul influences; at over four minutes it was more than double the ‘two-minute pop song’ length and probably started life as a jam session; it features Steve Marriott’s distinctive powerhouse vocals over Ronnie Lane’s driving guitar that became the band’s trademark in their live performances.

Track three You Better Believe It  is the first of three tracks written by Kenny Lynch – yes the Kenny Lynch who later became a TV actor.  He had had a couple of minor hits in the early-sixties with covers of The Drifters and Ben E King, as well as releasing the first-ever cover of a Beatles track which was, unsurprisingly, less successful.  His writing collaboration with this band, however, would prove far more fruitful.   The next track It’s Too Late was also written by the early band line-up, and has more of a Mersey feel to it, but One Night Stand reverts to the later style.  The final track on side one is the first single, Whatcha Gonna Do About It which was co-written with producer Ian Samwell, who was probably better known for writing the first hits for Cliff Richard before becoming resident DJ at the Lyceum in London, an early mod haunt.

Side two opens with Sorry She’s Mine, also written by Kenny Lynch, which establishes what would become the distinctive Small Faces single sound featuring Ian McLagan’s Wurlitzer to maximum effect.   Next comes the instrumental Own Up Time bringing out Kenny Jones’ drumming underpinning  McLagan’s Hammond this time before leading into the next rock track You Need Loving.  This formed part of their live set and is essentially based around Willie Dixon’s You Need Love, an earlier blues song that would later also be the inspiration for Led Zeppelin’s Whole Lotta Love.

Next up is another blues-inspired track written by the early line-up, Don’t Stop What You’re Doing, and leads on to E Too D which, instrumentally, is much more in the style of The Who.  The final track is the second single, Sha-La-La-La-Lee, again written by Kenny Lynch in collaboration with Mort Shuman, a veteran of rock ‘n roll writing for Elvis Presley, The Drifters and Bobby Darin.  A great choice of track to finish an album if you want the listener to turn it back over and start again – which happened regularly until my first copy was spirited away.

Fifty-odd years later, would I pick anything different?   Well, there was only one other album from that year in the original collection. Pet Sounds by the Beach Boys came out around the same time – a release that was billed at the time as ‘the most progressive pop album ever’.  Over the years, it has acquired classic status, being touted now by critics as having changed the course of pop music.   But that sort of conclusion is easy to arrive at when you weren’t even born at the time, and this blog is not about the benefit of hindsight, it is about the times as they were.

Now don’t get me wrong, I love the Beach Boys music, I had bought early singles by them and other similar surf bands like Jan & Dean.  The first time I heard Good Vibrations on the radio later the same year it was one of those rare moments when you can’t quite believe what you’ve just heard, because it was so different; but that track is not on Pet Sounds.   In fact, I had barely played the album before it disappeared from my room, and that later single outstripped the tracks on the album by such a distance that another copy wasn’t acquired until probably 25 years later on CD.

Nevertheless, as Pet Sounds is now considered a classic does that make it better than Small Faces? Never in a million years!

I have also compiled a playlist containing fifty of the best tracks from 1966.  To stream the playlist on Spotify, click the logo below: