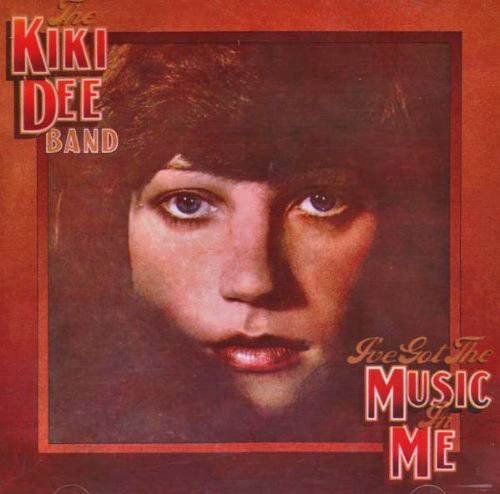 1974 was a year that ended much more brightly than it started, and is probably the reason why my choice for album of the year, Kiki Dee’s I’ve Got the Music in Me , was one of the more upbeat records to arrive during the second half of the year.

About two weeks before Christmas 1973, barely three months after our wedding, I was laid-off by my employer.  It wasn’t their fault, but the result of industrial action by the National Union of Mineworkers, that had far-reaching consequences not only in the economic situation it created, but from the support they received from other unions.  At the time, I was working as a contractor at Westland Helicopters in Yeovil – a company that was one of the most union-dominated in the Aerospace industry at the time, with a workforce that was fiercely-protective of its jobs in by far and away the largest employer in that area at the time.

It will be difficult for younger generations, who have grown-up with relatively toothless unions, to understand quite how difficult such a scenario was 45 years ago. Although it was necessary to have outside contractors there due to a massive spike in orders for their new designs, our presence was highly-resented by the union convenors.  In any case, this shouldn’t have mattered, as to be able to work there as a contractor, we also had to be members of the same union; and remember the mantra was “one out, all out”, so if any of us had a problem, they would support us – wouldn’t they?

When the Miners began their action over pay, all unions jumped on the bandwagon and began taking similar action in support, except at Westlands. Instead, we ‘outsiders’ became a focus for the Yeovil convenors to pressurise their management to get rid of us in order to not only pay for their demands, but in the knowledge that reducing the number of workers increased the amount of overtime necessary to keep up with the programmes.  Consequently, a couple of weeks prior to Christmas, we found ourselves having to return to our base offices where, within days, the announcement of the three-day week commencing on January 1st 1974, meant that there was no way of accommodating us in the short term.  On December 17th, I was laid-off – the first and only time I was ever out of work.

This lasted six weeks until the restrictions were lifted and we could obtain contract work again.   Thankfully, Kathy was not affected as seriously, so we still had some income coming in.  The initial period prior to Christmas was almost like a holiday, but once the New Year arrived, together with the realisation that it was pointless looking for work, even part-time, because there simply wasn’t any about – everybody was struggling.  So I found myself in our large flat with little to do during the day, other  than read and listen to music.  And the album that I played every single day, in its entirety, was Quadrophenia.

Looking back with older eyes, this was obviously some musical form of comfort blanket, as I had only sold my Lambretta four years previously, so the background story of Mod Culture still chimed strongly with me.  Throughout the year, even months after I had started work again, it was a regular listen, which is how, and why, that album became one of my all-time favourites.  I have no doubt that, more than anything else, that album got me through those difficulties which is why, to this day, Quadrophenia is one of a very short list of albums that always find their way onto the player at times of difficulty.   But it couldn’t be the 1974 album of the year, simply because it was issued in October 1973.

It took a while to recover, financially, from my enforced sabbatical, but once things were on track again, I was back to thumbing the racks in Wessex Records, with the assistance of the wonderful Mrs Gallop and her highly-knowledgeable recommendations, one of which was Kiki Dee’s I’ve Got the Music in Me.  I was aware of Kiki as a soul artist – her early singles always featured regularly on pirate radio, helping her become the first white artist to be on Motown’s books in the ‘sixties.   So I was sceptical about this particular recommendation, until the words “don’t prejudge it, it’s a bit different” were uttered – always a good indication to go to the listening booth.  Needless to say, I left the shop clutching it in the distinctive square bag.

This was Kiki Dee’s second album on Elton John’s Rocket record label but, unlike the first, it wasn’t produced by him.  Instead, the producer of all of Elton’s early albums, Gus Dudgeon, oversaw this one, and it shows.  The nine tracks are a blend of ballads and rockers, all but one of the tracks written either by Kiki herself (all ballads) or keyboard-player Bias Boshell.  Side One opens strongly with the title track, an upbeat Boshell rocker that was also released as a single, making it higher in the American charts than over here.  Track two Someone to Me is a break-up song and probably the track that focuses attention on Kiki’s voice more than any other on the album, to great effect.   The next track, Step by Step, is another upbeat track, reinforcing early-on not only how diverse this album is, but what a versatile band she assembled for it, and is followed by Water, a really atmospheric ballad.   Side one concludes with Out of My Head, written by lead guitarist Jo Partridge; he was formerly with Joan Armatrading whose style seems to be an influence on this track.

Side two opens quietly with Do it Right, a somewhat introspective song written by Boshell.  Track two, Little Frozen One, is another ballad from Kiki herself that follows a similar style to the second track on side one, but with more focus on the backing than the vocals, and this is followed by another Boshell ballad, Heart and Soul. The album finishes strongly with You Need Help, probably musically the best of Boshell’s rockers.

Although 1974 was not as epic a year for albums as the previous one, the selection of a Top Three was still not easy.  Among those I had to choose from were:  Bachman-Turner Overdrive’s Not Fragile, Eric Clapton’s 461 Ocean Boulevard, Hall of the Mountain Grill by Hawkwind, 10cc’s Sheet Music, Jackson Browne’s Late for the Sky, Diamond Dogs from David Bowie, Caribou from Elton John, Queen II AND Sheer Heart Attack from Queen, Tomita’s Snowflakes are Dancing, Supertramp’s third album Crime of the Century and Autobahn from Kraftwerk plus the debut eponymous album from Rush.

But the biggest problem was what did I do with Quadrophenia? As I said previously, it was the album I played most in the first part of the year, and continued to feature on the record deck regularly throughout.  However, it didn’t fulfil the prime criteria of having been released and purchased in the year in question, so should I change those?  Of course, one of the great things about self-imposed criteria is they can be ‘adapted’ at will, and in this case the problem was overcome by the invention of a new irregular category entitled ‘The One That Got Away’ – an album that would have featured in a previous year’s list had it been available for proper consideration.  In this case Quadrophenia had arrived in the collection after 1973’s decision had been made, and this extra category has delivered some interesting winners in the intervening 45 years, as you will read in future blogs.

This video features the opening track on disc 2 of Quadrophenia – if you want to see Thunderfingers’ legendary bass solo, go to 6.00!

With that problem overcome, the top three came down to I’ve Got the Music in Me, Not Fragile and Sheet Music.   Running these very close were Sheer Heart Attack and Caribou.  In the end, Kiki Dee’s album prevailed because it is strong throughout, thus one I regularly listened to in its entirety. So would any of the others albums supplant it now?

Well, I have to admit I haven’t listened to it much since, although reacquainting myself with it while writing this has confirmed its strength in depth.  But the album that I still play regularly, and has thus survived the test of time far more than the others from 1974, is Crime of the Century.  This was Supertramp’s ‘difficult third album’ and, although it didn’t feature heavily in deliberations at the time, I now recognise that it not only passed that tag with flying colours, but formed the basis for the next three, highly-acclaimed, albums that brought them to the forefront of rock music in the second half of the ‘seventies.

If you want to download or stream any of the top three albums, or others mentioned, here are the links:

I have also compiled a playlist containing fifty of the best tracks from 1974.  To stream the playlist on Spotify, click the logo below: