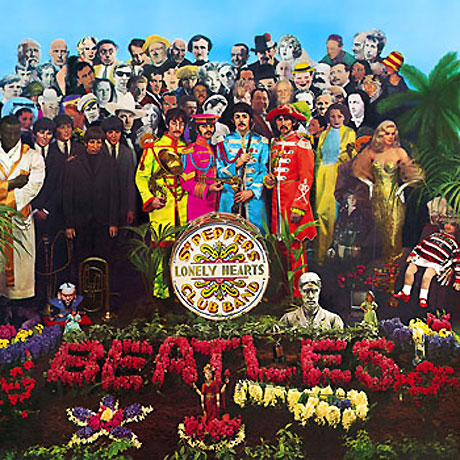 There was only one album that could have been Album of the Year in 1967 – Sergeant Pepper’s Lonely Hearts Club Band.  That’s because from the minute it was released at the end of May, it was everywhere – and I mean everywhere.  It went straight to number one in the album chart, and stayed there for the rest of the year.  Tracks were played on the radio, on the TV, it was played at every party you went to – in some cases it was all that was played – because everybody seemed to have a copy.   I had one, even though I didn’t have record player!

To explain: I had lost my record player and collection on my sixteenth birthday and, as you will read in the book, nothing I could do could get them back.  Instead I had become the (less than) proud owner of a beige lump of Grundig Reel-to-Reel tape recorder that was about as much use as a chocolate teapot as far as recording anything was concerned – let alone playing it back.   So I abandoned that and, instead, continued to buy records that I left at a pal’s house, who had a portable player.  He couldn’t afford to buy records, so got to play mine – on the understanding that, when I wanted to listen to them, I could borrow his player.

What I had acquired, however, on the last Saturday before Christmas 1966 was a blue and white 1960 Lambretta Li-150 Series 2.   How I managed to ‘persuade’ my headmaster to let me off the last two weeks of term to earn the rest of the cash I needed by doing the Christmas Post, is also in the book.   The birdscreen it was fitted with by its loving previous, and ancient, owner had been immediately consigned to the dustbin on getting home, and now it was roaring around the town regularly – that’s when I wasn’t falling off of it every time it rained; better tyres quickly solved that particular issue.

I was now in the first year of sixth form and hating every minute, mainly because the courses I was doing gave me virtually no free periods to spend in the common room, like my luckier classmates, listening to music.  I would leave school in mid-July for a job as a Trainee Technical Writer that led to a writing career that would take me round the world; but I wasn’t to know that at the time.   However, I did not have to start my first full-time job until September.

So ‘The Summer of Love’, as it came to be known around the world, provided an excessively-rare opportunity of seven weeks in which I had nothing to do except enjoy myself; and I had my own transport on which to do so – with company if I wanted it, having passed my test earlier in the year.   And it was one of those glorious English summers when the sun seemed to shine endlessly.   So I went to coffee bars with my pals during the day, listening to the amazing array of new bands on the jukebox and building-up the replays on the pin-table.   In the evenings, if we weren’t riding out en masse to a country pub, where the locals would eye us warily (I could never work out if it was how we looked, or the fact we were only drinking coke and lime) then there seemed to be a party somewhere every night – so we went to them as well.   And listened to Sergeant Peppers – endlessly.

This was The Beatles’ first studio album after packing-up live gigs – as far as I know, none of it was ever performed live, so the contemporary videos in this blog are of the two tracks that were originally intended to be on the album, but were released as a double A-side single beforehand.

1967 was the year when bands were experimenting with all manner of things – and not just musically.  This brought some very interesting themes into play, that could be explored in greater detail on a twelve-inch LP.  I guess Sgt Peppers was also intended to be a concept album, although it doesn’t really tell any story in itself.  However, you would never think of playing it in any other order than the band laid down – not if you’re from my generation anyway.  Regardless, over the intervening fifty years so much nonsense has been written about this album that I doubt it would be possible to distill the truth of whether that was their intention.

The opening line of the first track ‘it was twenty years ago today’ in itself became prophetic, because exactly twenty years later to the day the CD version was released (an event I celebrated by buying that as well).   The title track then morphs into With a Little Help from My Friends sung by ‘the one and only Billy Shears’, alias Ringo.   It then goes all trippy on track three, Lucy in the Sky with Diamonds which, over the years, has been analysed to death because of the three capital letters used in the title.  John Lennon insisted the idea came from a drawing by his son, but then he would wouldn’t he? Judging by some of the behaviour observed in other party-goers at the time, I’m sure they didn’t need any acrostic hints!

The musical style changed entirely for track four,  Getting Better, which has a more positive feel about it, and not just from the title.  In fact the musical styles hosepipe all over the place throughout, which in a way shows just how much The Beatles had evolved to be so important for their record company that they could essentially do as they wished, and nobody would dare stop them.   Of course, it helped to have a genius like George Martin between them and the bean-counters, and I doubt many artists, even today, would be given the sort of leeway he gave the ‘Fab Four’ back then. More to the point, I suspect this project may never have got past the planning stage without him.

Track five, Fixing a Hole, also bowls along quite nicely, even if it is a bit more introspective in its lyrics, and is followed by the more poignant She’s Leaving Home which is pure-McCartney.   The first side ends with Being for the Benefit of Mr. Kite! – a sort-of return to the crowd-entertainment theme of the opener and, apparently, inspired by the contents of old Circus poster found by John Lennon.   I can see how his playful imagination would be energised by something like that, but the problem is that in the intervening years since he left us in 1980, all manner of ‘experts’ have added their five penn’orth to the story of this album. For example: “The interpretive power of the mixed-media application accrues its meaning through the musical production with which the group imbues the Ur-text of the poster.”  I think I can imagine what Lennon’s response would have been to that: ‘What a load of bollocks!’

Side Two opens with the George Harrison composition Within You Without You, which is pure Maharishi.   Very occasionally, when you hear something for the first time, you are blown away by a particular piece – it only happens the first time, and I call it the ‘genius point’.   To follow that side-opener with the almost ‘Cockney Sparra’ When I’m Sixty-Four is, for me, the genius point in this album, because just as you are about to board your astral plane that will spirit you away to the ethereal sub-continent, and all that, you are suddenly awoken in a bawdy East End pub.  You can almost hear the banter: ‘Ere, d’ya know when I’m sixty four?’ ‘Naah luv, but you hum it, and I’ll join in on the Joanna!’

The next track, Lovely Rita, reverts to the more trippy style of some of the tracks, while Paul McCartney fantasises about pulling a Parking Warden, and is followed by another total contrast in Good Morning Good Morning which is simply a good old rocker despite our ‘experts’ trying to read all manner of meanings into the sound effects at the end that lead into a reprise of the opening track.   At this point, on first hearing, you are lulled into thinking that’s the end, but there’s one more contrast to come.  A Day in the Life is pure Lennon, apart from the middle bit which is pure McCartney.  I don’t know another single Beatles track that personifies their styles so clearly.  Was it written in a drug-enhanced haze? – probably. Does that matter? – not a jot!

Oh, and we mustn’t forget the bit in the run-off groove that was placed so that the auto-changer on most record players of that time wasn’t activated – so it could just go on forever if you wanted to annoy everybody else in the room.

So, fifty years on, would I dare to contradict the likes of ‘Rolling Stone’ magazine who, in 2003, rated this ‘The Best Album of All Time’ by saying it is no longer my best album of 1967?   Well, there are some notable contenders – Days of Future Passed by the Moody Blues, Cream’s Disraeli Gears, Love’s Forever Changes and Surrealistic Pillow from Jefferson Airplane to name but four in my collection.   For me, the Moody Blues album is the first true concept album, and features orchestral arrangements enhancing the band; it would be the first in a run of seven albums over the next five years that just took rock music to another level.  Disraeli Gears is still one of the best Blues/Rock albums ever, and the other two were both notable early psychedelic rock albums.

They all embody individual aspects introduced by The Beatles’ album, but not all of the aspects on one album; more importantly, they were all recorded after Sergeant Peppers was released.   So can they, logically, replace what probably inspired them in the first place?  Of course not and, more importantly, they can never recall that seven weeks of my life when nothing else mattered other than having a great time.

I have also compiled a playlist containing fifty of the best tracks from 1967.  To stream the playlist on Spotify, click the logo below: